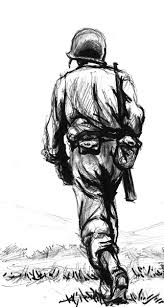 Every year about this time I find myself thinking a lot about my dad. It was right around now, many years ago, that he started on what proved to be an epic walk.

Dad was born in 1910 and died in 2002. He married Mom in the middle of the Great Depression and eventually fathered five kids. In between siring offspring, he spent a couple of years helping fight a war, together with 16 million of his fellow countrymen and women.

Pops joined the U.S. Army in early 1944. Surviving letters he wrote to Mom recount his loneliness in basic training at Fort Benjamin T. Robinson and later at Fort Benning, where he learned to be an infantryman. Then it was time to take the troop train to New York and sail across the Atlantic to Le Havre, France.

According to the map that Dad brought home when the war was over, his outfit, the 71st Division, arrived at Le Havre on February 6, 1945, and trained at Camp Old Gold with headquarters at Limesey. Later they moved by rail and truck from the staging area near Limesey south to Paris and then east to the town of Nancy and on into Alsace. Their first assignment was to relieve the 100th Division at Ratswiller. The ouster of Germans from France began a few days later. Hitler’s troops were on their last legs, having been repelled by the Russians on the Eastern Front and pushed back from the west by the Allied invasion on the beaches of Normandy. But der Fuhrer was exhorting his men to fight to the bitter end. The war wasn’t over yet.

The Division was committed to action on March 11, and for most of the next two months Dad and his buddies were on foot. After the war, he told many a story about the guys he found himself yoked with, and how much they helped one another endure the challenges put in their way. One of the first things they learned after starting their walk was to get rid of unnecessary baggage.

“You should have seen the pile along the roadsides,” he’d tell us. “As we started into Germany, guys began tossing all kinds of stuff overboard. Extra clothes, pieces of gear we didn’t think we’d need, every ounce that wasn’t needed for survival—off it went. In some places the piles were several feet deep.”

The Division moved through the outer belts of the Siegfried Line, captured Pirmasens on March 21, and crossed the Rhine at Oppenheim on March 30. In the first week of April after three days of intensive fighting they eliminated the 6th SS Mountain Division Nord and slogged on to Meiningen and then angled southeast toward Bayreuth. They took Coburg without resistance on April 13, cutting across and controlling the Munich-Berlin autobahn, and then captured Bayreuth after fierce opposition on the 16th. Later in the month they destroyed Schonfeld, took Rosenberg, crossed the Naab River on the 24th and the Danube on the 26th. Regensburg fell on the next day and Straubing on the 28th.

As resistance crumbled, the Division crossed the Isar and entered Austria. They seized the town of Steyr on May 4 and made contact with Russian forces east of Linz on May 7, the day before hostilities ceased. After the fighting was over, the Division was assigned occupational duties until it left for home on the first of March, 1946. From what Dad told us kids, he considered himself lucky to have made it through the hostilities unscathed, and to end up in a beautiful part of the world.

He never knew exactly how far he and his buddies had walked, but I suspect it was close to 300 miles, given the big loop they’d made swinging north out of France and then later south down to Austria, all the while lugging rifles and ammo and field packs.

I asked him once how he’d managed to make it that far.

Easy, he said. You just kept putting one foot in front of the other.