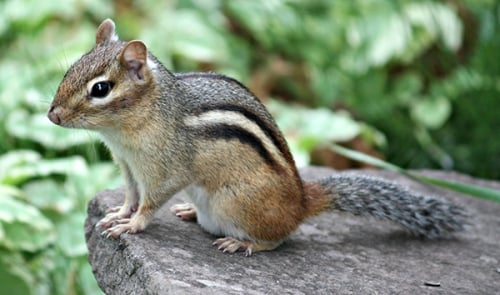 Many years ago a family of chipmunks moved into our house.

Not the house proper, of course; nothing like that. Instead they took residency under the stone-and-concrete walkway leading from the front door out to the attached screened porch.

When we built the house, decades ago, I’d had visions of installing a modest waterway that started in a fountain in the flower garden west of the porch and ran under the walkway to a recirculating pool out on the adjoining terrace, and deliberately left a space beneath the walkway to accommodate the brook. But I never got around to completing any of it, and after a while the chipmunks took advantage of my sloth and moved into the little underpass, no doubt dragging in plenty of dry grass or moss or whatever striped rodents use for carpeting and upholstery, together with a reasonable supply of groceries.

Now it’s important to note that both my wife and I are comfortable with this arrangement. Years ago we came to accept the idea that all forms of life are entitled to some sort of home ownership. Granted, we get antsy about sharing the inner parts of our house with mice or moths or bats, and have been known to evict unwanted tenants. And, yes, we’ve sprayed the occasional wasp nest built worryingly close to an entrance door and taken action more than once to escort marauding woodchucks, intent on eating the produce in our vegetable garden, on to the next incarnation.

But chipmunks, aside from filching the odd ripe strawberry or black raspberry, do little to upset the balance of our homestead, and in fact add an undeniable charm to the enterprise. It’s almost impossible not to smile at their quivering manic energy and the way they explode from a stand-still to full speed like diminutive four-footed dragsters.

I once found myself wondering if such a rapid, stop-and-start habit of living might not result in widespread and premature decrepitude, and imagined ranks of retired chipmunks confined to tiny rocking chairs living out their sadly tarnished golden years beneath the walkway slab. But then it occurred to me that such a high-octane lifestyle might just as easily lead on to a lively and laughter-filled old age, one in which the elderly looked back with happy memories at the events and exploits of their younger years.

Why not imagine an aging chipmunk smiling to him-or-herself at the recollection of first love?

Why not a gray-haired elder looking back on a bonanza of collected sunflower seeds or the remembered juice of stolen berries dripping from youthful whiskers?

And what of the joyful prospect of yet another oncoming winter spent in the gentle reverie of months-long hibernation, during which all worries of food procurement or fears of house cat predation are eased aside by slumber?

The more I thought about it, the clearer it became that the little critters who share our address have as much right to dream as we do; and I for one hope those dreams are filled with triumphs and delights.