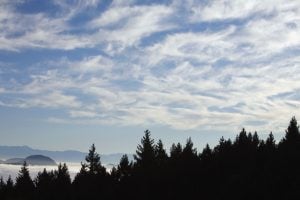 On a recent road trip out to Washington State and British Columbia, I found myself astonished by the beauty and variety of our continent.

Not that this insight is anything new. My wife grew up near Seattle, and through the years we’ve driven or flown out there several times. We’ve also enjoyed visiting the San Juan Islands, the beautiful town of Victoria, B.C., and the world-class city of Vancouver. But this trip nailed home the fact that North America itself is a very special place, and those of us who live in it should consider ourselves very fortunate.

As all trips westward from Minnesota must, ours started with crossing a state Flat Stanley would love, in this case North Dakota. Regarded by many as not only flat but also rather boring, we tried to view it with fresh eyes, and found it far more interesting than we’d thought. For some miles beyond Fargo, the land is indeed largely horizontal. But then bumps and valleys and hills begin to appear, and little by little the land turns from prairie to plains and the textures and colors of the soil grow visible and interesting. Soon we were oohing and aahing at the varying layers of earth visible in the sides of eroded hills, and wondering aloud about the difference between a mesa and a butte (my dictionary says a mesa’s more extensive than a butte but less so than a plateau, which helps a little). By the time we were halfway across the state, we’d fallen half in love with it—and fell all the way when we hit the badlands and stopped for the night in Medora. No wonder Teddy Roosevelt went gaga over the area! This is a place of world-class beauty, period.

The next morning we crossed into Montana, and were once again captured by the glory of the scenery and enthralled by the openness of Big Sky country. There is something about a seriously distant horizon that liberates the spirit and literally puts your day-to-day worries into more accurate perspective.

Later, when the first line of mountains appeared, our feeling of well-being grew even stronger. Thanks to the newly posted 80-mph speed limit on the Montana Interstate, mile after mile of stupendous scenery flew by in a mellow unspooling of time, and by late afternoon we pulled off the road to stay overnight in Bozeman, delighted with the progress we’d made and the beautiful country we’d been through.

At dawn we pushed on toward Idaho and the glory of Coeur d’Alene Lake, still astonished at the sights revealed at every curve and mountain pass. We’d been through all these places before, but never been struck so strongly by their natural beauty. That night we stayed in Spokane, and the next day went on to visit friends who live in the woods north of Loon Lake, in a log building of their own making. During our stay they took us on walks around their acreage, and we marveled at the sight of giant Douglas fir and lodgepole pine and the magical sound of a murmuring mountain creek.

And then it was on across the border into British Columbia and a drive up the west shore of 65-mile long Kootenay Lake to stay with dear friends who live in the town of Kaslo. Upon arrival we learned that the next day was Canadian Thanksgiving, and that we’d be sharing a celebratory feast two days later. In the morning we drove to the north end of the lake and around to the tiny settlement of Johnson’s Landing (population approximately 30) where our friends had lived for many years before their house was buried under the rock and debris of a landslide triggered by excessive rain and which had occurred, fortunately, when neither of them was home. Tragic as that event had been, we were struck by the grandeur of the forested mountainsides and the beautiful vistas of the lake, and by the love our friends still felt for their special corner of the world.

Days later, on the way home, we couldn’t stop talking about the natural beauty and magnificence of all that we were driving through.

We live in a truly lovely land.