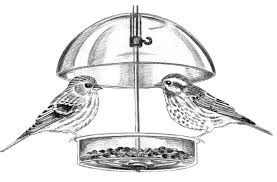 Like millions of other Americans, my wife and I enjoy feeding birds. Given the fact that we live in the woods and have accidentally also found ourselves feeding bears, we long ago ceased stocking our feeders once spring has arrived and our furry neighbors have awakened. But from late fall through winter, we keep a steady supply of cracked corn, thistle seed, and black sunflower seed on the feeders on our terrace, along with slabs of suet for the woodpeckers.

Over the years, after many experiments, the furniture in the outdoor restaurant on our terrace has settled into a simple pattern. We have a low, open-topped table on which we scatter cracked corn. We have a stationary, copper-roofed, glass-sided feeder into which we pour sunflower seeds, flanked by two smaller hanging feeders also filled with seeds. We have a single thistle feeder suspended from (and sheltered by) the eaves of our house, and a simple wire-screened suet feeder attached to a tall wooden post.

The corn on the open table attracts red and gray squirrels, bluejays, an occasional smattering of other birds, and, more and more, whitetail deer which have taken to climbing the stairs to our terrace in a most dignified manner.

As you might expect, the seed feeders primarily attract chickadees. Each fall, toward the end of October, my wife notices a chickadee or two at the empty feeders and informs me it’s time to buy sunflower seeds. Together with nuthatches and bluejays and squirrels, chickadees consume the bulk of the two-to-three-hundred pounds of seeds we put out each winter. Given the fact that each chickadee weighs roughly one-third of an ounce, they clearly eat more than their body-weight in food each day—which, given the fact that their hearts are said to beat 500 times per minute, makes sense to me. We also see common redpolls and goldfinches on the main feeders, and squirrels, bluejays, and deer often scavenge fallen seeds on the snow below them.

Off to the side of the other feeders stands the post with the blocks of suet, to which come a variety of woodpeckers, ranging in size from the little downys, the larger hairys and red-bellieds, on up to the giant pileateds. We also see both red-and white-breasted nuthatches at the post, together with an occasional chickadee, and, near the ground, pecking at fallen pieces of suet, a lone brown creeper.

Depending on the time of year, we’re also apt to see pine grosbeaks and purple finches stopping by to grab a bite. One year we even had a female cardinal! Since then we’ve considered seeing a counselor to help us get over the extreme jealousy we feel toward folks in the area who are routinely visited by male cardinals, but thus far have held off doing so. Now and then the terrace is abruptly alive with ground-feeding slate-colored juncoes, but they rarely stay around for more than a few days.

In the main, our al fresco cafe is a peaceful place. But now and then we’ll notice feeding birds abruptly stop moving and turn into virtual statues, which we’ve learned means there’s probably a predator at large, perhaps a northern shrike, swooping in to spear a juicy little chickadee for lunch. Fortunately, such alarming events don’t happen often. In the main, watching our feathered neighbors enduring the cold and snow with dignity and grace rewards us several times over for our efforts, and helps us remember to count our own blessings.